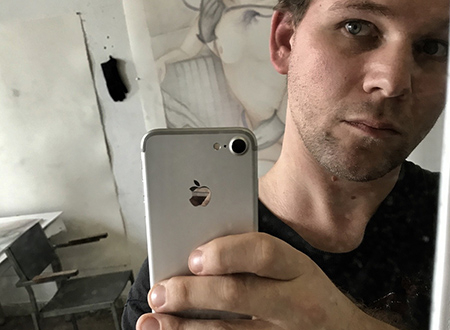 Koes Staassen (1985) is a highly refined drawer. In his thoroughly constructed drawings, Staassen shows nude male bodies in a graphic manner, through the use of a zooming frame as well as the way in which these scenes are drawn. Though images of male bodies surrendering themselves to the eye of the viewer are not as prevalent as depictions of female bodies, Staassen is motivated to bring forth a very personal relation to eroticism and has developed an intimate process in expressing these fantasies.

Mostly working with graphite, silverpoint and colour-pencil, Staassen gives in to his desire in order to express lustful tenderness with sharpened tools.  Carefully caressing the paper, gradually building up the bodies and surrounding objects alike, Staassen's work evokes the sensuality of his subject matter.  This soft approach to his personal world of desire adds an almost dreamlike quality to the drawings, attracting the viewer to come close and investigate.

Staassen’s drawings function like still lives, combining bodies and objects. The objects take on symbolic value as they can be used to both adorn and threaten the body. In this form of drawing, there is no different priority given whether to an erect penis or a (fake) pearl; all are brought to the same level. This is the level of eroticism, where everything can be desired.
Lately, Staassen’s gaze has began to slowly shift, moving from the sole act of looking to acting. As the sessions he has with close friends become more experimental, he zooms out, allowing the viewer to see more of what’s at stake. The drawings are becoming larger in size, the pencil-strokes more ambiguous, conjuring a playful setting in flux rather than a fixed scene.